How i stood up for my dignity

Indian gals are generally expected to keep quiet and  resist all the atrocities come wot may come,but thanks to my mother who had always advised me and encouraged me to stand up for the right cause.
A few days back while i was travelling in a train,  a middle aged man who was standing along with his wife some distance away started his  best possible time pass by staring continuously at me, i felt embarrassed  at a time n disgusted too cuz the man was holding his baby in his arms n he was not having any shame in his eyes.I first of all refused his shameless eyes n try to kept me calm by avoiding the whole situation n covered  my face with the newspaper i always purchase while  travelling as it is multipurpose especially for Indian gals ranging from a good time pass, knowledge source n saving ourselves from such shameless eyes.
A few moments later i again notice his eyes were badly searching to have  a look on my face,but this time i was finished reading newspaper my only weapon to save me.So, i just kept mum with my veins filled with anger,now this guy did not put an end to his shame here , shortly after i finished reading the newspaper he got his golden opportunity to  click my photo in his cell phone, the moment i heard the click of the camera i was 100 % confident that the guy has achieved his victory.I became more angry, my mind n heart was floating with thousand of weird ideas, wot should i do should i go to this man n snatch the cell phone n delete my pic? or should i kept mum like a good Indian girl? or should i take some one's help ? or should i talk to his wife? time  started passing n so my thoughts were varying, but one single thought which was continuously pinching me was wot this man will do with my pic? will he share my pic with people like him? this weird thought urged me to take stand for me , n dis time i was sure for my next move.
off late the the train reached its final destination n now it was the time for me to take stand, i chased that man , ran behind him , asked him with decency n dignity to show his cell phone to me n told him straightforwardly the necessity to do so, as i suspect him that he has clicked  my photo with out my permission,,that man's face turned pale n he started  shivering a bit ,, n not too my surprise i found my pic in his cell i deleted my photos from his cell , den  came his wife who was left behind somewhere in crowd along with her kid ,she inquired about me with a bit suspicion  , i told her to take good care of his husband activities n gave the required details :), that man apologized to me and the rest of the part was played by his wife who shouted on him like hell on station in front of the whole mob :) LOLS n that was the beginning of my good day i was happy , relieved N Satisfied by what i have done.
This is my first article on this blog n i must say the credit goes to women's web whose interesting stories n article had given the impetus to participate in the http://www.womensweb.in/articles/i-stood-up-womensweb-blogathon/ 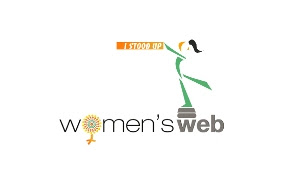